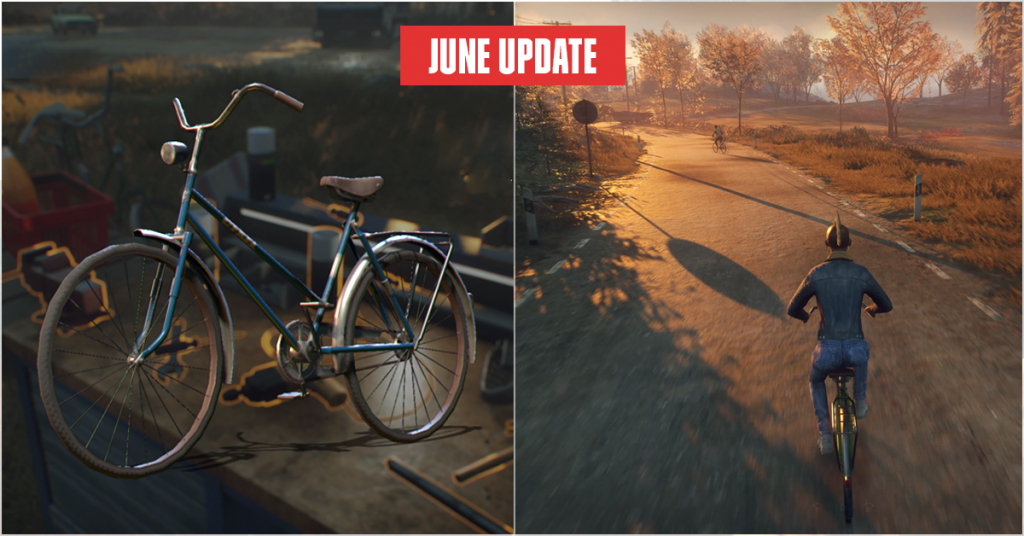 The team is excited to bring you our second new feature to the game – Bikes! An iconic part of 80’s culture and a great source of transportation, Bikes will definitely change how you make your way across Östertörn. Available at every safe House, players can now interact with the Bike station to spawn their own “Cykel” Bike. This model comes in three different colors, with Sky Blue available immediately and the Emerald Green and Ruby Red variations unlockable by destroying certain machine types.

You’ll notice that this particular Bike performs better on the road than off it, so keep that in mind when planning your routes. And beware of machines, they still can and will attack you on sight! Lastly, as this is our first step with Bikes in Generation Zero – our plan is to continue to iterate and improve them over time based on your feedback.

As discussed in previous communications, in this update we set out to take a long look at Missions, based on feedback and data that showed that they were not working as expected. After digging into things, we decided to make some alterations “under the hood” to the Mission system to improve the experience for players now and in the future.

So, what does this mean for you? Primarily we’ve sorted issues where Main Missions (previously called Warboard Missions – Payback, Safety, & Answers) could get stuck in an uncompletable state. Therefore, if you are currently stuck or were at risk of becoming so, this fix will solve that. This means that players will now be able to finish the core game story without fear.

Of note, this fix does come with some quirks. One is that this update has the side effect of us resetting progress on your current Missions back to the first step of that Mission. Again this only affects players that are part-way through a Mission, so if you are at the first step you’ll see no change. Doing so was a necessary step to improve the system for now and the future – We apologise for any inconvenience it might cause in the short term.

Secondly, if you are someone who is currently stuck on a Warboard Mission from the region you logged out in, the Mission will disappear from your Log – But it’s not really gone! You’ll just need to fast travel out of that region then back for it to reappear. This is a late discovered bug that we’ll look into fixing for a future update.

Another benefit of looking into the Missions system is that we’ve improved some of the HUD / Map elements to make things clearer and easier to understand. For players, this means that your current Mission objective will now appear in the upper left of the HUD (which can be turned off in Settings). Additionally there are now more icons on the in-game compass at the top of the screen to help guide you to where Tracked Mission items are.

Our aim is that through all of these combined improvements, players will have an easier time getting through the game. Please let us know if we hit the mark or not!

Based on player feedback from the last patch, we identified a few areas that needed to be touched up a bit as the changes we made didn’t quite land the way we intended. Please keep the feedback coming on these items as we continue to improve the overall game experience.

We heard from you that the tweaks we made to how explosive damage vs. machines was calculated made the difficulty swing too much the other direction. After looking into it, we’ve increased the explosive damage for all weapons, gadgets, and environmental objects.

No more empty spawning loot containers! You reported some bugs but also mentioned that in general this just didn’t feel good, so we they’ve now been tweaked to prevent them from being empty when they’re spawned.

This means that any loot container that you have not looted within 4 hours of gameplay should contain at least one item when you open it. Keep in mind that loot is saved locally – which means that loot containers looted in single player will remain looted if you join a multiplayer game within the cool down period.

Just like with loot containers, we wanted to make looting machines feel better. To that end we’ve made some more tweaks which we think are an improvement.

The biggest change is how much ammo will drop for all enemy types. We want the amount to better reflect the ammo cost of defeating them. This means that on average you should get back as much ammo as you used to best the machine you fought. On top of that, all machines can now potentially drop health items!

To round things off, all Tanks and Harvesters now have a chance to drop bonus items such as weapons and attachments. Item rarity is tied to machine class with C-class variants dropping the best items